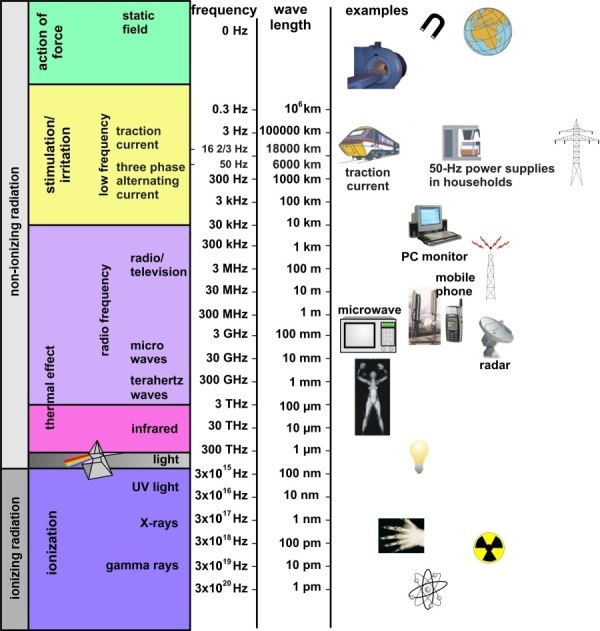 All electrical applications that are run on power supply (railways, electrical appliances in the home and at working places) lie in the range of low-frequency alternating fields up to 1 kHz (wavelengths of larger than 300 km) (Low frequency (0.1 Hz–1 kHz)).

The intermediate frequency range from 1 kHz to 10 MHz (wavelengths from 300 km to 30 m) (Intermediate frequency (1 kHz–10 MHz)) include the lower range of the radiofrequency band with its corresponding applications, but also applications working with specific frequencies, such as induction cookers and electronic article surveillance systems in stores, as well as many industrial and medical applications.

The range of microwaves from 300 MHz to 300 GHz (wavelengths from 1 m to 1 mm) lies within the radiofrequency range (Radio frequency (10 MHz–300 GHz)) and is thus a part of it. The microwave range is used, for example, by television stations, mobile networks, radar systems, therapeutic devices, and microwave ovens.
Terahertz waves are also in the non-ionizing radiation spectral range, between 300 GHz and 10 THz (wavelengths from 1 mm to 30 µm). For example, they are used for quality control of industrial products, at some airports in body scanners for security control, or in skin cancer scanning systems.
On the frequency scale terahertz waves merge into the thermal radiation range of infrared light (10-384 THz, wavelengths from 30 µm to 780 nm). The following range of 384 THz to 789 THz (wavelengths from 780 nm to 380 nm) is visible to the human eye and is therefore referred to as visible light. This is followed by the ranges of ultraviolet radiation (UV light) and the ionizing radiation with even shorter wavelengths.

The EMF-Portal contains information only on the range of non-ionizing radiation of the electromagnetic spectrum up to 10 THz, i.e. information about static fields, low-frequency, intermediate frequency and radiofrequency fields, and terahertz waves.